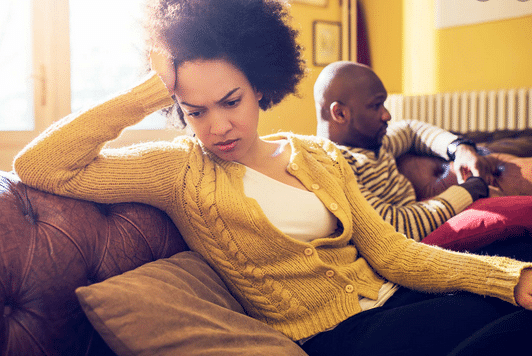 Read: Traditional Marriage rite in Igboland: How it is done

Let’s x-ray some of the causes of unhealthy marriage relationship and then proffer solutions to them.

Some of the causes of unhealthy marriage relationship in Nigeria society include:

One of the major causes of unhealthy marriage relationship is Social incompatibility of Marriage partners. Marriages with no good foundation or basis for being contracted are bound to go down into an unhealthy marriage. This is so because the couples are socially unequal and may only manage to get along for a short while before signs of inequality would begin to manifest. Again, crises are bound to ensue in a situation where a marriage partner sets high and unrealistic standards in the home. The fallibility of man is unquestionable and as such it is not possible that such idealistic standards will be realized. This is capable of degenerating into unhealthy marriage relationship in the home. Many married people become disillusioned when they discover that their union is not all they had expected and that their spouse is not quite what they had envisioned him/her to be. Additionally, many couples unrealistically expect to get more out of marriage than they put into it.

The Problem of Sexual incompatibility can be solved earlier if the two partners learn to communicate and understand each other.

Bad sexual orientation of one of the marriage partner is capable of leading to unhealthy marital relationship. Such orientations like homosexuality, lesbianism, bestiality, sodomy, oral sex, excessive sexual appetite especially when the other partner is at the other extreme of the scale can generate crisis in the homes. Most of the time, such extreme sexual behaviours or orientations are discovered rather too late or midway into the marriage that it becomes very difficult to pull out of the engagement. And when once a partner cannot get along crisis ensues.

An extended family affairs is a culprit to so many unhealthy marriage relationship in Nigeria Society. Some once upon -a-time happy couples have had their marriages rocked for their inability to properly manage extended family issues. In most cases, women find it difficult to accommodate relations of the husband (especially mothers and sisters – in-law) and vice versa on the part of some husbands, a situation most marriage partners may find difficult to accommodate. Some women often quarrel with spouses whose interests are only on the betterment of their own relations.

Lack of Mutual respect for one’s spouse is also cause of unhealthy marriage relationship in Nigeria. It is also a factor capable of rocking even the strongest marital foundation of hitherto blissful homes. The Holy Bible admonishes couples thus: wives respect your husband who in turn should love their wives as they would their own body. One can quickly assume that each of the above mentioned conditions is a sine qua non for the other since a husband might find it difficult to continue to love a wife who doesn’t respect him or his authority; neither would a wife respect the husband who does not love her. Respect and love are reciprocal variables in every marital union and as such, a spouse owes it an obligation to respect and love his/her marriage partner, failure which fans the embers of marital discord and discontent.

Dishonest behaviour coupled with moral decadence in the family can generate an unhealthy marriage relationship. A situation where a couple cannot tell each other simple truth is not healthy for the union. Once such morality gap is discovered in any of the spouses, mistrust sets in and confidence gradually gets eroded with crisis eventually taking over the home front. Poor morality or decadent moral culture may unwittingly be imbibed by the children of such a family in which case the entire

Family fabric weakens due largely to an atmosphere of mutual mistrust that eventually envelops it.

Negligent behaviour on the part of marital partners is a critical factor capable of causing unhealthy marriage relationship. In taking marital vows, a couple normally would promise to oblige the partner of his/her responsibility towards him/her, while avoiding indulgences that could mar their union. But experience has shown that soon after, some marriages collapsed on the strength of negligence of such avowed obligations. On this, a partner would start to feel cheated thus giving opportunity for tension to build up.

A factor that has occupied central position in all discourse concerning successful marriage is ‘marital communication. Inability of spouses to communication effectively with each other is very unhealthy to the union. Effective marital communication entails that couples discuss issues, respond to questions, call for explanations and accept same timely (when given), as any delay may send out a wrong signal which a partner is bound to interpret same way. Effective marital communication can in fact assuage many other marital disquiets before they could degenerate into crisis situations. Put differently, poor marital communication has been blamed for some other marital problems that have even culminated into divorce or separation of spouses. Purposeful open dialogue between couples often tends to be overtaken by incessant arguments about anything, everything, and nothing; misinterpretation generates misunderstandings; verbal attacks are countered by keeping silence especially on the husband’s side.

Bickering, unnecessary criticisms, gossip or what may simple be tagged nagging has rocked some good families. It is not an over statement that majority of the women take to nagging instead of politely confronting their husbands with issues. Most men in turn do not take kindly to such threats and would go a long way to crushing such tendencies. This case of attack and counter attack is crisis prone, as no reasonable man would want his authority as the family head be usurped.

Few solutions to unhealthy marriage relationships in Nigeria include:

One of the best solutions to unhealthy marriage relationship in Nigeria is to build an effective communication structure. Communication is a vital component that keeps marriages healthy and happy. Poor communication can poison the relationship between two partners. If one partner is unhappy, it is important to communicate that with his/her partner and this can result to positive change.

Partners have to create time and engage with each other on a daily basis. Talk about the things affecting their marriage and how important they are in their life. If they are afraid to talk to each directly, texting or calling each other will surely pass a message that will bring happiness back into your marriage.

Another solution to unhealthy marriage relationship is to learn to forgive and forget. To err is human but forgive divine.  No one is perfect and even the most perfect people do make mistakes. For partners to bring happiness back to their married life both must learn to forgive each other and most importantly, forget about the bad thing she or he did. Also, never judge partner because doing so will make him/her feel bad and that can affect mentally and psychologically.

If ones partner has done something wrong, it is important to talk to him/her nicely without cursing or shouting, and make he/she understand how bad you feel about the bad thing they did to you, but mention that you forgive them.

The time you’ve started experiencing unhappiness is the best time to be more committed to your partner. Talk about his or her goals and ambitions and always be supportive. The best thing you can do is to avoid anything that reduces the level of commitment to each other and show them that you still love them.

For instance, you can brew a cup of coffee for her or leave a letter note in his briefcase. That way, you give yourselves a reason to be happy again.

If you want to have healthy marriage relationship, always seek for help. Sometimes carrying marital burdens could be very tiresome requiring someone to share with; after all, a problem shared is half solved. If you know of a couple who are happily married, talk to them and ask how they manage to be happy in their marriage.

Ask how they solve problems and also how they talk to each other when storms strike their marriage, and then apply their techniques in your relationship. If you think your marriage needs more support, talk to a professional either with your partner or alone.

Talking to a professional can help in uncovering the root cause of your unhappiness and give you any ideas on how to fix it.

Love, affection, and attention are some of the pillars that keep marriage relationship healthy. When one or all of them is missing, the happiness disappears too. You should give them all to your partner even if you two are not in good terms.

Give your partner the attention they deserve and most importantly, show them love. Treating them with gratitude and respect can surely fix your unhappiness. It may be tough to show love to the person who has wronged you, but it’s only affection that can bind the hearts together.

Be kind to your partner and do well to them even if they are the bad guys in your situation. When you show such love and affection, your spouse responds with the similar affection and there you are, happy again!!

Another perfect way to solve unhealthy marriage relationship is to deal with every situation at a time. So many issues, may it be household chores, family responsibilities, money or even child care have cropped up causing uneasiness in your marriage.

Trying to solve all of them at the same time will only give you nothing but a headache and more troubles between the two of you. The best thing is to solve them individually and when you manage to fix it, move on to the next issue and deal with it head-on.

You can do this regardless of how long it takes to solve a single problem, and most importantly, solve it together.

As you find the solution to one problem, happiness will come back in your marriage without even noticing.

Marriage in Nigeria just like any other place can be tougher than you first thought, and making it work requires care, time, and patience. When you are not experiencing the happiness, you had when you were dating or when you married, just know there is a problem.

Thinking of when things started becoming sour in your relationship could be the road towards discovering your problem. After finding out where the challenge is, follow the above ways and you will definitely fix the unhappy marriage and enjoy living happily ever after.