WHO IS THE PRESIDENT OF NIGERIA

Questions › Category: Politics › WHO IS THE PRESIDENT OF NIGERIA
0Vote UpVote Down

WHO IS THE PRESIDENT OF NIGERIA. I JUST WANT TO KNOW.

Muhammadu Buhari  is the President of Nigeria, in office since 2015. He is a retired major general in the Nigerian Army and previously served as the nation’s head of state from 31 December 1983 to 27 August 1985, after taking power in a military coup d’état. The term Buharism is ascribed to the Buhari 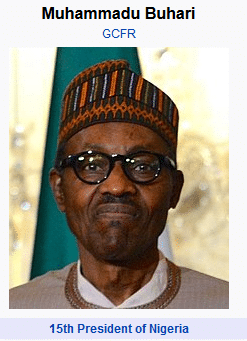 He unsuccessfully ran for the office of president of Nigeria in the 2003, 2007 and 2011 general elections. In December 2014, he emerged as the presidential candidate of the All Progressives Congress for the March 2015 general elections. Buhari won the election, defeating the incumbent President Goodluck Jonathan
source: wikipedia