Cloud technology also known as Cloud computing (CC) is the latest way of storing and accessing data and programs over the Internet instead of computer’s hard drive.

Internet has become a global village and a many giant technology companies have taken advantage of this. One of such Giant tech company is  Google, the big G. Others include; Microscoft and Amazon. 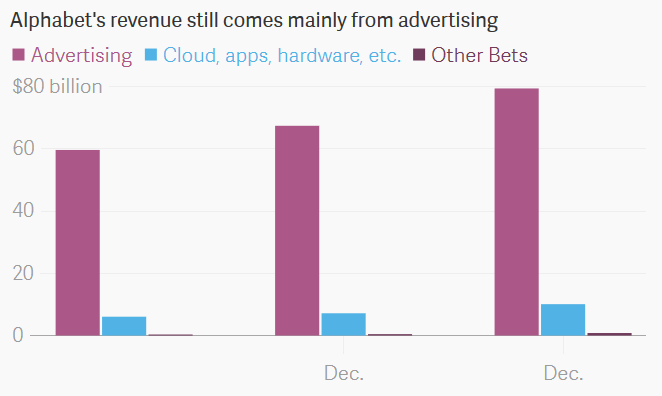 In these moonshots, “hemorrhage money”; Google looks into a more staid source of income through cloud computing.

While other tech giants like Amazon and Microsoft dominate the cloud computing market today, Google executive chairman Eric Schmidt took to the Google Cloud Next event keynote stage March 8 to make the case for his company’s cloud future. You can store your files anywhere, Schmidt says, but Google’s prowess in using artificial intelligence to understand a company’s data sets it apart.

In this model, companies would pay Google to store their data and run programs on its servers, tasks that once required prohibitive capital investments for small business companies.

“Big data is so powerful that nation-states will fight over [it],” Schmidt said. “He who has the data that can do the analytics … will provide huge nation-state benefits.”

Last year, Gartner predicted that cloud computing would have a $1 trillion dollar impact on information technology spending by 2020, a figure echoed by Google Cloud SVP Diane Green in an interview with the Wall Street Journal.

“It is so early,” Greene said. “Ninety-five percent of the world’s data is not in the cloud.”

Internet balloons and energy kites give Google its air of dreamy creative, but they’re not paying the bills. Even capturing a small percentage of the cloud market could ease Google’s reliance on advertising, which today makes 88% of its income and subsidizes the other projects.

The economic potential for Google has been so great that the company has invested $30 billion to build out these cloud services, Schmidt said during the keynote. Even conservative estimates of Google’s potential revenue from cloud computing offer a stark contrast to the amount it has poured into Other Bets without the promise of significant return, nearly $7 billion since 2014.