The National Identity Management Commission (NIMC) has embarked on a nationwide indefinite strike in protest against poor funding, allowances and working conditions amid the COVID-19 pandemic on Thursday 7, 2021.

Naijaonlinebiz.com gathered that the staff had complained bitterly over not receiving protective equipment, even though they have been listed as essential workers amid the COVID-19 lockdown. 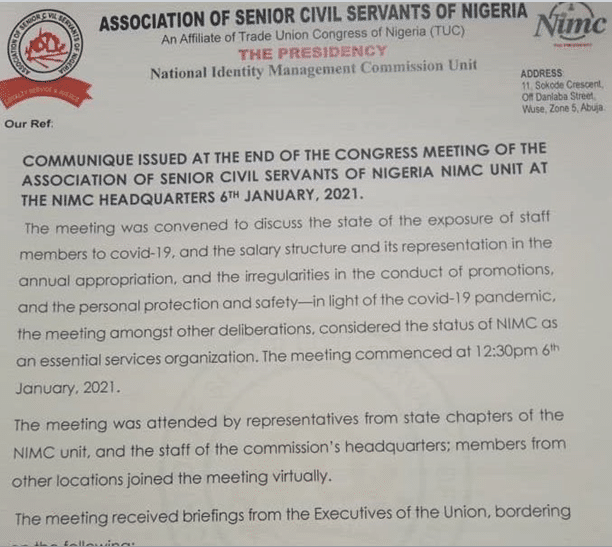 “As you know workers on level 12 downwards are not supposed to be at work, but we came out to do this work voluntarily. Because of the government’s attitude, we are withdrawing our voluntary services until something is done about it,” Nigerian Tribune quoted Paul Soros, who leads the protest in Yenagoa, Bayelsa State, as saying.

He said while they work under pressure to enable people to get their national identification numbers, the government has failed to provide the essential tools to function effectively, according to the report.

While civil servants of Level 12 and below are directed to resume but, they were ask not to do anything while in office. So, NIN registration has been Suspended pending when the strike will called off.

Nigeria, Africa’s most populous country is now on the second wave of COVID-19. The management of Lagos University Teaching Hospital, LUTH raised alarm over the upsurge of severe cases of COVID-19 new infections in the hospital.

So far, 92,705 COVID-19 infections have been confirmed, 76,396 cases discharged and 1,319 people have died in Nigeria’s 36 states and the Federal Capital Territory, according to Nigeria Centre for Disease Control (NCDC).

The virus has claimed more than 1.88 million lives in 191 countries and regions since first being detected in Wuhan, China in December 2019, according to US-based Johns Hopkins University. More than 87.3 million people have been infected worldwide so far.