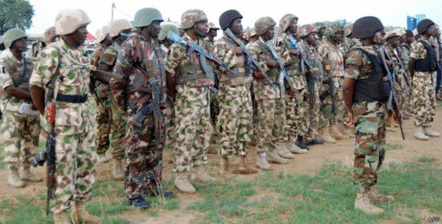 So, in this article; I’m going to detail the differences between DSSC and SSC for better understanding and in other for you to make the best choice when joining the Army. Let’s start by explaining the meaning of the two terms and combining them together so that we can get the differences.

DSSC in Nigerian Army simply means direct short service commission. DSSC is open to both civilians and serving military personnel. It’s a short period of training organized by the Nigerian Army for graduates who possess HND, BSC or its equivalents from any recognized Nigerian university to join the Army. This training usually lasts a period of 6 – 9 months. Their training is usually less strenuous not as in NDA where SSCs are trained. Direct Short Service Commission are granted for 15 years, for an initial period of 8 years, renewable yearly for another period of 7 years.  People who join the Nigerian Army as DSSC are those people that has a career that they wish to continue in the Army when they join. Let’s assume you studied law in the University or engineer, the best for you to apply is DSSC because when you join, you will continue your career in the Military as a lawyer or Engineer.  Lawyers in the army are usually found in the Army Legal Services and the Military Police. They can also be found in lesser numbers in other corps and services. As for your private practice, it all depends on what type but you won’t be expected to have your private practice as a lawyer alongside your military career. The age to apply for the DSSC is always from 22 years to 34 years.

Nigerian Army SSC means short service commission. it’s a short time training to graduates from different universities and polytechnics in Nigeria that qualifies and want to join the Nigerian Army. SSC are granted for 15 years. Ten years on active list renewable thereafter for a period not more than 5 years.  No extension shall be granted after the fifteenth year of commission except on conversion to regular combatant commission where applicable.  Officer cadets who successfully complete the military training shall be granted the rank of second lieutenant. They are also trained for a period of 6 – 9 months before they pass out and become an officer in the Nigerian Army. SSCs training is usually strenuous and mainly in NDA.They are trained to fight. They are trained to be combatant, to be able to lead troops in the war zone. They are trained to compete with the regular cadets who has spent 5 Years in the Nigerian Defence Academy to become an officer. SSC gets deployed to combat corps (depts) such as artillery, armour, infantry, ordinance etc. while DSSC gets deployed to non-combat corps like finance, education, medical etc. To join through SSC, you have to be young. Those in the DSSC tends to be older than those in the SSC. The SSC age bracket is from 22 to 28 years. SSC on completion of officer cadet training are commissioned as 2nd Lt (1 star) while DSSC are commissioned as Lt (2 stars). Those in the SSC are likely to be promoted faster than Officers in DSSC. The DSSC also retire earlier than the SSC because most of them are already old and won’t be able to continue the work. So, they can be retired voluntarily or they will be retired compulsorily. While there are differences between the two, there is also similarities among them. To join DSSC or SSC, you have to be a University graduate. There are some ranks that the both Cannot reach even if they are convert to regular officer. Ranks like major General, Lieutenant General, General and Field Marshall. But those regular cadets who has spent 5 Years in training can reach any rank in the army. Both SSC and DSSC are of relatively short durations (not more than 12 years, excluding extension of service) and must convert to RC and DRC respectively to enjoy a longer career. Now, for you to join any of the two, there are some criteria and requirements which you need to meet.

Be a Nigerian as defined in the constitution of the Federal Republic of Nigeria.

Be a male or female between the ages of 20 and 32 years, while medical consultants should not be more than 40 years of age by January 2020.

Be medically, mentally and physically fit according to NA standards.

Be recommended by at least 2 recognizable referees who must attest to the applicant’s character and integrity. These could be a Local Govement Chairman/Secretary or any officer of the Armed Forces not below the rank of a Lieutenant Colonel and equivalent or an Assistant Commissioner of Police and above who must hail from the applicant’s state of origin.  Passport photographs of referees must be affixed to the letter of attestation.

Candidates must submit a letter of Attestation from their former institutions.

Must not have been convicted by any court of law.  Military personnel must be free from any disciplinary case (This is to be endorsed by the Commanding Officer/Commander).

Possess at least a first degree with not less than Second Class Lower Division or HND of not less than Lower Credit from any accredited institution of leaning. Courses of study must also be accredited at the time of study.

Possess a valid certificate of state of origin.

Applicants must possess NYSC discharge certificate or a valid exemption as the case may be.

Graduates with professional qualifications must be duly registered by relevant bodies recognized by Nigerian Laws at the commencement of cadet training.

Only post-secondary academic credentials obtained from 2010 to date will be considered.

Candidates must present contact addresses and telephone numbers of parent/guardians and Next of Kin.

You must possess your certificate of state of origin.

Candidates must not have any body inscriptions or tattoos.

Candidates must tender all original copies of educational certificates (primary to post-secondary).

Service personnel must present valid military identity cards and letters of recommendations by their Commanding Officers/Commanders.  They must also present valid letter(s) of NA sponsorship in tertiary academic institutions. Additionally, they must have served for a minimum period of 5 years in the Armed Forces of Nigeria.

Candidates must not be members of any cult/society/frateity.

9 thoughts on “Difference between Nigerian Army DSSC and SSC”