How to Write a Complaint Letter (with Samples)

What is Complaint Letter?

A complaint Letter or Letter of Complaint is a letter written to address wrong doing, issues, annoyance, injustice, indignation emanating out of a product, service etc.  It is usually used to raise concerns about unfair treatment and seek a positive outcome for a customer or consumer. They are also used to vent out pent-up emotions arising out of painful or bad experience. It is a fundamental right and duty of a consumer/customer to seek justice arising out of any injustice, which is initiated by a Complaint.

Complaint letter then, become first Step towards customers/consumer’s Rights. It inspires other hassled customers/consumers, influence the concerned authorities towards taking proper action and make the offender more liable, responsible and responsive. This is because unresponsive behavior of the offender is liable to a Punishable Court Proceeding or an Expensive Lawsuit.

Writing complaints letters is an essential responsibility of the victim who seeks fair outcomes. Complaint Letter writing is not only a pre-warning for the offender but also a chance for them to rectify their act in time. These letters are not just meant for defective products or service. It can also be written towards any injustice happening in the society, like ‘Smoking in Public’, ‘Misuse of Water by any Person or an Organization’ and any issue happening in society which needs to be addressed.

Anyone can lay complaint through letter if there is a legitimate reason.  Many people have been denied their benefits when working with one company or the other.  It is your right to Anyone can write a letter to the administration regarding the pollution, water supply, traffic problems etc. Complaints can be written to NEPA, PHCN or Electricity Department. A complaint letter can also be written to banks and other financial institutions on issues related to cash withdrawal, transfer, bill payment and so on. Complaints are also written to police, HR, Employer, Embassy, etc.

Types and categorizes of Complaint Letters

Format for writing Letter of Complaint include;

This section describes the situation

Example 1. I write to inform you on the poor performance of your bank especially in the handling of my Account DT4227.

Example 2. I humbly write to inform you that the account information sent to me does not bear my correct name.

Example 3.  I am writing to inform you that we (Tenants of No. 34 Princewill Road) ’re overcharge by NEPA/PHCN.

This section describes the causes.

Example 2: We took count of all our points and we’re convinced that we are overcharged.

I believe corrections are to be made by the reason of this letter.

If proper care is not taking, I am thinking of closing the account.

I look forward to receiving your explanations on these matters. Thank you

Sample of Complaint Letter to a Bank 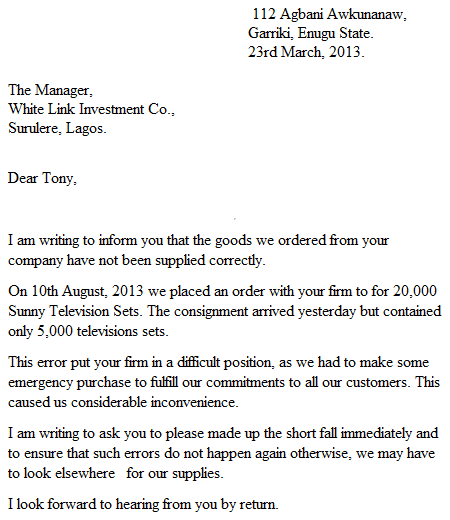 I regret to write to inform you about my acute disappointed with the performance of your bank especially in the handling of my account DT4227.

I have been an old customer of your bank and have been operating this account satisfactorily for over eight years it is however sad to notice that each time I pay  money by cheque into the account; it is never credited into the account until some four (4) weeks later. This is very sad lapse. I have been acutely embarrassed on several occasions.

As I consider this and other lapses delays, and long waiting for cheque to be paid and other hitches encountered to be greatly inconveniencing, I am now considering the possibility of closing my account in the bank. However, I want this letter to be a signal warning before any action can be taken.

I do most sincerely hope that this warning and complain will lead to an improvement.

Sample of Complaint Letter to a Company

Complaint Letter to a Company

I am writing to inform you that the goods we ordered from your company have not been supplied correctly.

On 10th August, 2013 we placed an order with your firm to for 20,000 Sunny Television Sets. The consignment arrived yesterday but contained only 5,000 televisions sets.

This error put your firm in a difficult position, as we had to make some emergency purchase to fulfill our commitments to all our customers. This caused us considerable inconvenience.

I am writing to ask you to please made up the short fall immediately and to ensure that such errors do not happen again otherwise, we may have to look elsewhere   for our supplies.

I look forward to hearing from you by return.

Read also: Tips for writing an application letter for leave of absence

1 thought on “How to Write a Complaint Letter (with Samples)”